How can I Download & Install on a 2nd PC?

You can download MenuPro again on a new computer using the same download link you were sent via email, or you can copy the downloaded Product Setup file from your original download onto a USB flash drive and take the flash drive to your new PC and install from the flash drive by double-clicking the saved file.

How to move MenuPro Data to a new PC

To transfer MenuPro and its data (Menus and Food Items) for versions 8 thru 10, from one PC to the another, do the following:

On the Original PC - Backup

On the New PC - Restore 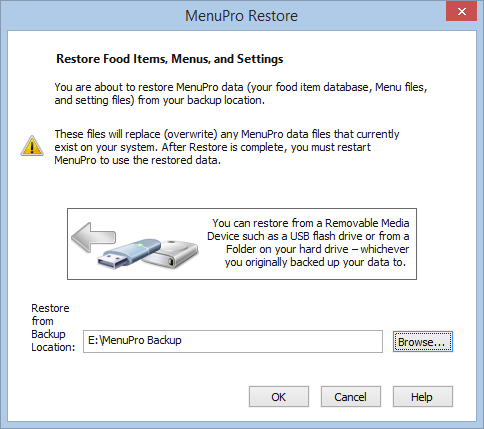 Tip! If you can't install MenuPro on the new PC because you do not have any Activation uses left, you must first Deactivate on the old computer after you have finished the Backup procedure. To Deactivate, run MenuPro, and select Help > Deactivate MenuPro. You can find out more about Backup and Restore from within MenuPro – run MenuPro, click F1 for Help and then search for Backup and Restore.

MenuPro 7 and earlier versions used a different database format and did not have Backup/Restore. So follow these steps if you have a very old version of MenuPro and you want to transfer that data to latest version of MenuPro.

I just upgraded to MenuPro 10. Where did all my Menus go?

MenuPro 10 uses a new Default Menu folder called MenuPro Menus which it creates inside your Documents folder. So when you first start the new program, it defaults to that folder during a File > Open Menu

We recommend saving all your menus in one Default Menu Folder, whatever that is, so when you use the MenuPro Backup command all of your menus will be backed up.

I lost my download link or CD. Can you send it to me again?

Yes, send us an email with your name, purchase date, and license code if you have it, and we will email you your download link once we verify your purchase details.

If you lost your MenuPro 10 CD, we can replace it for a nominal charge, provided we can verify your original purchase. But we can also send you a download link at no charge via email.

Important! Replacement CD's or Download links will NOT contain a product License Code. The product License Number or Code you received when you originally purchased the product is your proof of license and cannot be replaced.